Posted on November 6, 2006 by admin.presshost

When I first moved into this house, I started to formulate an idea for a new pond in the back garden. There actually was pond already, but it didn’t look very good so my plan was to fill it in when I create the new one.

I knew where I wanted to put it too. As you come off the patio into the back garden would be perfect.

The previous owners had built a very Australian feel bush garden in this area but it was held in by border paving that was originally designed to form a circle but they had attempted to form an oval with it. As a result, there were gaps where the concrete blocks didn’t quite meet up.

The lawn was starting to push into this garden and, as I discovered when I tried to remove the grass runners, there was no plastic underneath the pea gravel meaning that there was nothing stopping the weeds from growing up through the small stones and nothing to stop the small stones ending up buried in the sand.

The first thing I started to do was remove the lawn along the edge of this garden so I could plant a couple of citrus trees.

I decided to use the border edging from the bush garden to border the new garden bed that I was creating thus causing the gravel to fall further into sand.

With the idea of the pond still in my head I bought some more border pavers and some box hedge to divide the future feature from the existing garden.

Around the same time I also attempted to plant a lot of seedings into the new garden but unfortunately, due to the cat digging them up, very few survived. 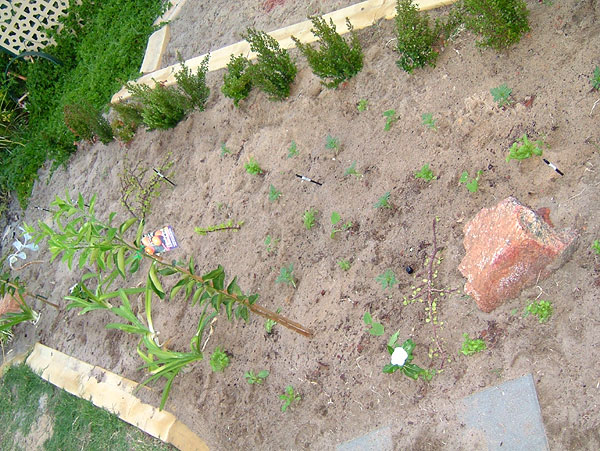 With the new slabs and box hedge at the back and citrus trees at the front, the new garden bed has taken shape.

At this point the new pond was a distant plan but something happened to speed up the development.

Above the existing pond sat a bridge. We had been warned by the previous owners that it was a feature only and not really strong enough for people to stand on. I knew that I would have to get rid of this bridge because it was not keeping with the plan I had in mind.

Of course, moving a bridge like that would have been a lot of work so it was not something I was really rushing to get done, however nature had other plans.

Rather carelessly, the previous owner had built the bridge out of untreated pine and then allowed the pine to come in contact with the ground..

Great meal for the termites!

And thus ended the bridge.

And with the onset of winter, the work on the garden also ended.


This entry was posted in Garden, Home and tagged Gardening, pond. Bookmark the permalink.